We started our trial run of The Goodness Box recently. I have been wanting to try out subscription goody boxes for a looong time. I think they are END_OF_DOCUMENT_TOKEN_TO_BE_REPLACED

What is it about needing to do my assignment that made me want to shop shop shop? Procrastinating? Perhaps. Emotional buying? Most likely.

Anyway, I have recently befriended a fellow bag lover and talking to her reignited my NEED for a new bag. Since returning the last “nappy bag” that didn’t work out, I have yet to find one I like enough to spend the money on*. I am considerably picky when it comes to bags, and I have not had the opportunity to actually go shopping for one yet. Mr E did spoilt me with a beautiful one last year for our 5th wedding anniversary, but like I said above, I NEED another new bag 😛

Looking at the list, you would agree with Mr E that, yes, they all kind of look the same. Small, crossbody bags, or a backpack. You would think that also, having 2 babies, I would need a suitcase to replace the nappy bag I have at the moment. Well, yes, you are correct, the backpacks I’ve picked will indeed replace the nappy bag. However, I will still need another cute bag to carry for my stuff. So really, I technically NEED two new bags 😛

Here you go, Mr E, I’ve made your Christmas shopping so much easier for you heh heh heh

* Lies. I bought a cute little one in Japan. But it doesn’t count as it was a silly fun one (ie. not build to last). Not a proper bag. Oh, another lie. I did buy one the day my Mat Leave started in June this year. But again, another silly fun. Not a proper one. >_< #awesomeatjustifying

I miss the food in Japan. How I wish we have good authentic reasonably-priced Japanese food here in Canberra. It was great timing that I saw this recipe in a cookbook that was given to me for my birthday this year by Mr E’s uncle!

My loves liked this meal, with the little one having thirds! Mr E liked his wasabi so he said he would double the wasabi if it was just for him (it’ll be too strong for babies). You could also steam the chicken with the vegies if you want to be extra healthy 🙂

Reason #46633869 why Japanese public transport is frikkin awesome: go to your local train station at any time of the day and almost always, you could be in any other major city in no time. Without much hassle. One morning, within 30 minutes, we arrived in Kyoto (from Osaka). Another 20 minutes got us to Uji, a small town famous for its green tea and a world heritage shrine. Amazing! 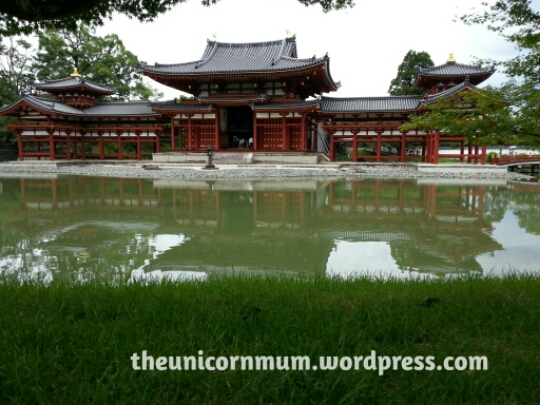 This building, Byōdō-in, is so beautiful that it is featured in ¥10 coins. The phoenix on top of its roof is featured in the ¥10,000 notes. Apparently, this building was made into a Buddhist temple, dedicated for people to depart to their next life. I think.

Sample set of different soba: one of which is matcha soba.

I had another emo-period of terribly missing my precious, however, as if my dad inlaw knew, I got emails from him with happy photos of Little E. He looks very well loved and spoilt. He’s a blessed boy to have such loving grandparents, who are generous with their time, attention and love. The three most important, and so precious, things anyone can offer. I felt a lot better after seeing the photos 🙂

After lunch, we visited a registered UNESCO world heritage shrine, Ujikami-jinja. I love going to shrines, again, because they remind me of my grandma and my childhood. I also like seeing the bundles of people’s prayers hung up around the place. I personally think that without hope and faith for a better future, what kind of life would you have? 🙂 regardless of your religion or lack thereof.

We then went to the oldest continuing green tea producer and shop. We met the one of the owners, who is a 14th generation of tea producer and saw a photo of his grandson (the 16th generation). He proudly showed us the many awards they won and how apparently, their tea is the tea of choice for the emperor of Japan!

There, we did an introduction to Japanese tea ceremony, including grinding our own matcha (green tea powder). I am not a fan of matcha but I wanted the experience, so I’m glad that I did it. Also, at least now I know for sure that I really don’t like the stuff, because Uji is probably the place to have it 🙂 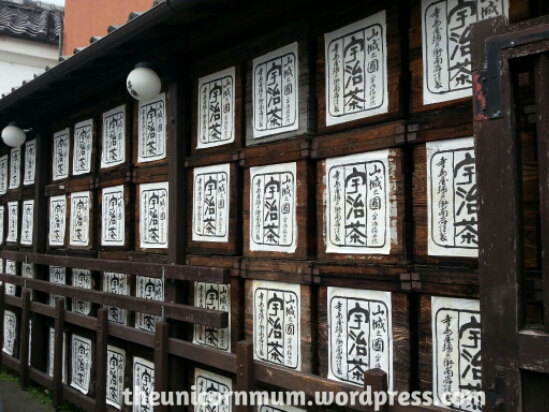 I liked Uji, it is only a short trip away on the train from Osaka and/or Kyoto, which makes it a good day trip option 🙂